Monday, June 3 - I have not blogged for over a week. I will not recap the lost days except to say they were mostly dark and cloudy with some rain. We have done nothing worth blogging about, even to ourselves. A period best left blank.

Dorothy has been telling me for years we have almost spent 2,000 nights in KoKo. Last night was finally the night.

We returned to a fav CG for a short stay. We have enjoyed almost 72 hours of glorious weather. The chap next to us told me the source of the river we are on comes out of the side of a hill. I had to see that. It was not difficult to find, I just looked at the map to see where the river started and followed the Forest Service roads there. I don’t do photograph waterfalls very well and the sun would not be illuminating the entire waterfall for another hour or so. But I got some snapshots to remind me of the place.

In the afternoon, we decided to go to an area shown on the map as having many lakes. I thought I might get some interesting reflection shots. We got to within a mile of the place and ice was blocking the road. I used 4WD to go a little farther but bailed when the ice became solid across the road. We had seen no one the whole drive, no cell service, so we would have to self-rescue. No thanks. It’s not the first time ice has stopped us, but this was at only 6,600 feet.

In most of the country as soon as you are a few hundred yards away from something, it’s gone. What I like about the west is that you see mountains 70-100 miles away. They may disappear for a time, but when you crest a hill, there they are again. This is farming country. The terrain is much like the rolling hills of eastern Washington. Here the Tetons pop up above the fields from time-to-time.

I did not get a single shot of the Tetons this trip, they have been cloud covered for a week. Did you know that seen from the west side there are two sets of Tetons. 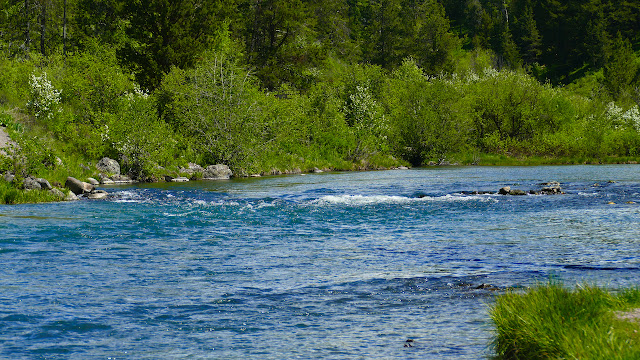 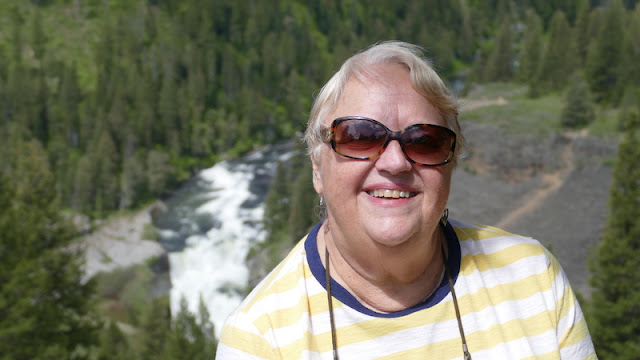 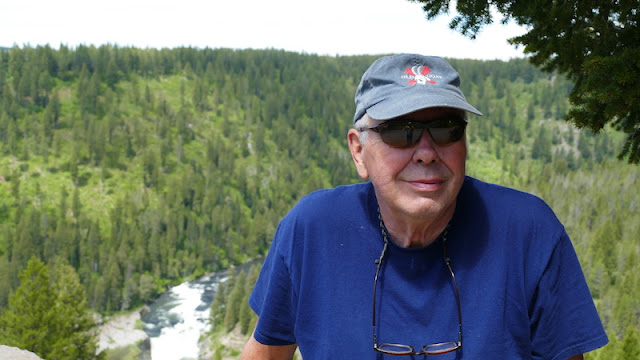 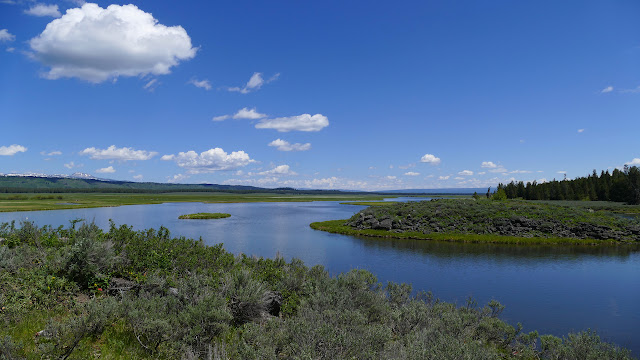 The West Fork Of The Henry River

Tuesday, June 4 - We drove north an hour and parked at a county park on a lake that is one of the sources of the Henry Fork of the Snake. Tomorrow we will trip out to see another source of the Henry Fork.

We are trying to decide where to go next. The forecast for Friday and Saturday is poor, maybe a wintry mix? When is summer again?

Were have had strange weather the last few years. On our first trip in 2006, we had perfect weather for eight months except for a hail storm in Colorado.

Wednesday, June 5 - There was an unscheduled shower overnight, but the skies were blue by 8am. We went to see a first magnitude spring that is the major source of the Henry Fork of the Snake. It looks just like the springs in central Florida - water gushes out of the ground. A house was built on the site by Johnny Sack. No, not the Johnny Sackrimoni of the Soprano’s, but a 4’ 11’ chap who built it himself. Alas, it’s was too early in the season for the house to be open, but we have seen wood log cabins.

I wanted to go back to Harriman Park. You know the E.H. Harriman in Butch and Sundance. Turn of the century big money built ostentatious mansions in Newport, the Hudson River, Lake Tahoe, etc. This is different. The setting is magnificently picturesque, while the cabins are comfortable, but rustic.
It was named the Railroad Ranch as the owners were railroad men, but the Guggenheims were also owners.

You may have heard more about one of his E.H.s’ sons, Averill, who was a power player and ran for president twice. https://adst.org/oral-history/fascinating-figures/averell-harriman-the-old-crocodile-of-diplomacy/

We sat on the lawn and enjoyed the view for an hour or so.

Thursday, June 6 - Birds! There are all sorts of birds here. I guess the riparian setting is appealing to them. Several species of ducks, geese and even swans. We are fond of yellow birds. There are three types of yellow ones here. One with a yellow belly we could not identify, a yellow rump warbler and third I will get to. The former put on a show for us. He did a dance on a favored table, a partner appeared and they fluttered face to face like hummingbirds for a few seconds and then zoomed off in different directions. Wonder is it was a hookup?

After a mid-afternoon rain shower, the birds came alive in the Aspens out our rear windows. There was a pair of our favs, the Western Tatanger. They will not perch for more than a second before hopping to another branch, so photography through windows covered with raindrops is a challenge. Dorothy got some that were in focus, but she forgot to zoom, so it was not much of a shot. 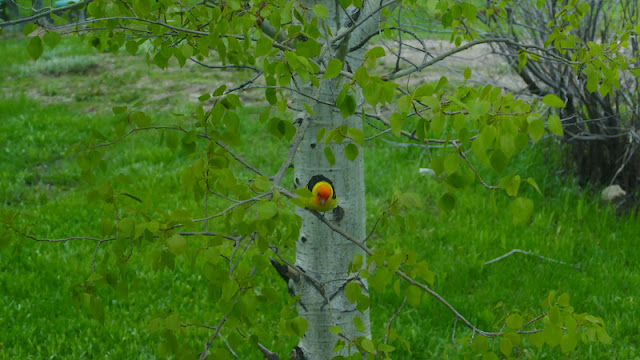 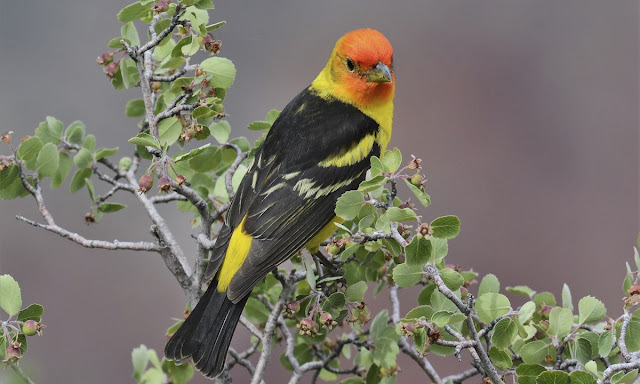 The South could Use A Few Colorful Birds

Friday, June 7 - We made the 30-minute drive to West Yellowstone to pick up some essential groceries. The rain started on our way back and continued off and on the rest of the day.

Saturday, June 8 - We awoke to the promised wintry mix, about an inch of slushy snow. The temp was 32. This did not stop the fishermen from putting their boats in by 6am. The sun broke through for a few minutes around 8:30. It took us a minute to figure out why the solar panels were passing only a fraction of an amp to the batteries. They were covered in snow and there is no way I will go up on a wet slippery roof to clear them. Thankfully, the snow melted before noon and we were fully charged by 2pm. The mountains around us got a good layer of the white stuff and they are sparkling in the sun this afternoon.

Sunday, June 9 - Sunshine! Yippee!  We drove few miles north crossing into Montana. We have never understood why, but just crossing the border puts you in Bay Sky country. What changes so quickly? We are so damned pleased to have a few days of sun. We dropped 1,200 feet and drove along the Madison River to a BLM campground on the river. Us, one other RV and the camp host. Dorothy declares it the best she has seen anywhere. We are in a valley with the sparkling snow-covered mountains just to the east. It’s about 65 degrees. 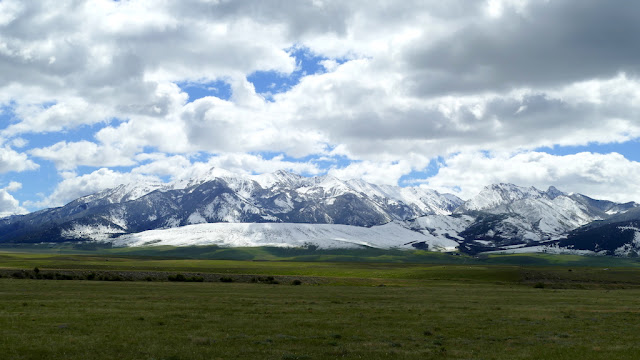 Along The Madison River In Montana 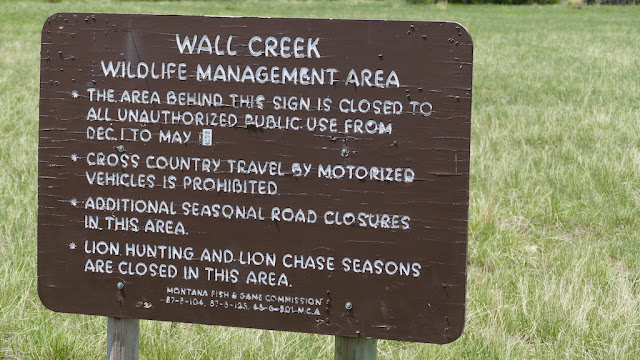 Check Out The Last Bullet Point 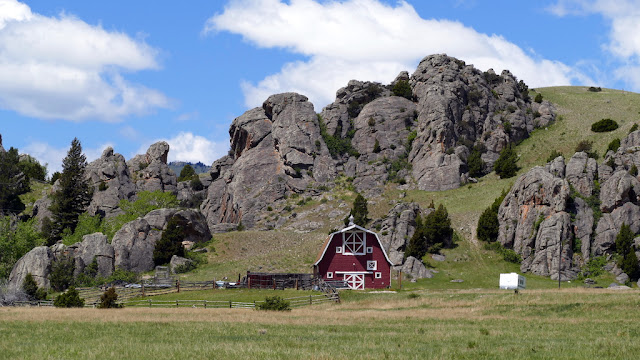 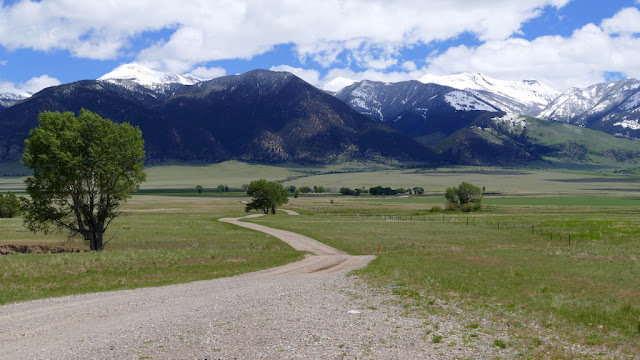 I had thought we would tour Virginia City this afternoon but after discussing it, we both recalled we had driven through it sometime in the past and thought it looked like Gatlinburg. A tourist trap. We will just stay in the campground and look at the views.

Monday, June 10 - We drove 22 miles north to another BLM CG. This one overlooks a lake. It would be a fantastic home site. Only two sites. Free. Good cell signal after being in a hole yesterday.